Topher Chan grew up playing in the dirt and riding around with his father, uncles and grandfather as they farmed pears in the Sacramento River Delta. At one time, the area was home a large Chinese population – the result of Chinese laborers who came to the area to build the massive levee system necessary to contain the river, prevent flooding and make farming possible in the rich Delta silt. Although the Asian influence can still be felt in Delta

communities like Locke and Walnut Grove, Topher Chan is one of the few Asian farmers left in the area. “They were smart and most left to become doctors and lawyers,” jokes Topher. “I think there are a couple of Japanese farmers still left, but we are the only Chinese fruit farmers still operating. Kids just don’t want to come back to farm anymore.”

But farming is in Topher’s blood. His great grandfather, Chong Chan, came to the Delta as a refugee of the great San Francisco earthquake in 1906. To support his family, he worked as a farm laborer toiling in the River pear orchards. Chong eventually settled in “Chinatown” near the small town of Courtland where he opened a grocery store and began to grow pears as a tenant farmer. After watching a good number of River pear farmers go out of business, he decided that leasing was the preferred method of obtaining farmland. Chong’s son, Lincoln, carried on the pear farming tradition taking it to new heights. Lincoln purchased his first farm in 1942 and, with his three sons, grew the business into a large farming enterprise he called Lincoln Chan Diversified Farming – for good reason. At one point in the 1980s, Lincoln Chan was reportedly the largest pear farmer in the state. Lincoln was certainly a large figure in the River Delta area and a huge influence on Topher. 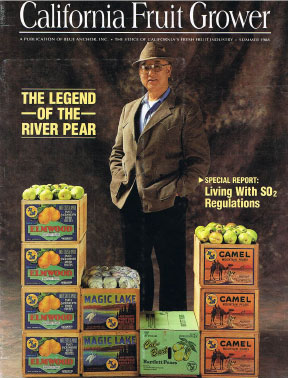 Topher went to college at Cal Poly in San Luis Obispo, graduating in 2007 with a degree in Environmental Horticulture. He interviewed for jobs in landscape design, but soon realized where he needed to be. He wanted to come back to the Delta and farm. He does so today working with his father, Wally Chan. In addition to pears, the operation farms corn, wheat, alfalfa and tomatoes. They own some of the land they farm, but — like his great-grandfather — the vast majority of their farmland is leased. “It’s very difficult to obtain farmland in the Delta,” Topher explained. “Everything is going to wine grapes and people are coming in and paying cash. It’s hard to compete with that.”

There is much about farming today that Topher finds difficult with excessive regulations, labor shortages, water battles and food safety requirements making it more expensive and time consuming to farm. But Topher continues because he loves it. “I love the lifestyle,” he explains. “I like the freedom it gives me, but I also like being accountable. Things are always changing and yet, they’re the same.”

And so it is that this 4th generation Chinese-American farmer continues the tradition of farming pears that his great grandfather began more than 100 years ago. We can only hope it will last for at least a hundred more.