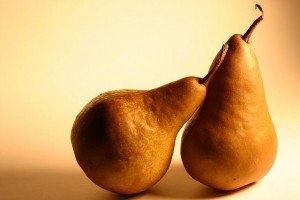 The old saying goes, “An apple a day keeps the doctor away,” but a different fruit may provide the same, if not more, benefits: the pear. Research has shown eating just one can fill us with high levels of vitamin C and fiber at just under 100 calories. Eating a pear or drinking its juice may also help stave off a hangover and reduce risk of stroke. Now, a study from Louisiana State University has found people who eat pears are less likely to be obese.

The study, published in Nutrition and Food Science, revealed people who ate pears had a lower body weight and were 35 percent less likely to be obese than their pear-abstaining counterparts. The researchers also investigated the effects eating fresh pears had on nutrient intake, diet quality, cardiovascular risk factors.

Using nine years of data from the National Health and Nutrition Examination Survey, which involved 24,808 participants aged 19 and up, the researchers found on top of lower body weight and less obesity risk, pear consumers were generally older, consumed less alcohol, and smoked fewer cigarettes than those who didn’t eat pears. Pear eaters also had a higher quality diet, characterized by higher levels of fiber and overall vitamins, and less fat and added sugar. This was despite both pear eaters and non-eaters consuming the same amount of calories.

To determine what specifically the pear eaters were doing to maintain a healthy diet, the researchers looked at the Healthy Eating Index, “a measure of diet quality that assesses conformance to the Dietary Guidelines for Americans,” according to the Center for Nutrition Policy and Promotion. They found pear eaters consumed more whole fruits and grains, and plant and seafood-based proteins, while limiting their sodium and empty calorie intake.

“The association between pears and lower body weight is very exciting,” lead author Dr. Carol O’Neil, of the Louisiana State University Agricultural Center, said in a press release. “We believe fiber intake may have driven the lower body weights that were seen in this study because there was no difference in energy intake or level of physical activity found between the fresh pear consumers and non-consumers.”

Fiber is important to our daily diets for a number of reasons — it helps with digestion and keeps us feeling fuller longer. This in turn helps to stave off food cravings, which helps with weight loss. Studies have also shown fiber may help reduce risk of heart disease, type 2 diabetes, and cancer. Aside from pears, fiber can be found in raspberries, lentils, artichokes, and various whole grains. Mixing up the types of fibrous foods you eat will be best for your health.

Despite the benefits, the researchers found only 2 percent of Americans ate a single, medium-sized pear — this alone accounts for half of the recommended daily fruit intake, according to the Dietary Guidelines for Americans. In concluding their study, the researchers wrote “consumption of fresh pears should be encouraged as part of an overall healthy diet, since pears are nutrient-dense and can help individuals meet the fruit recommendation.”

Health Benefits Of Pears: Pear Eaters Less Likely To Be Obese Than Everyone Else